The recorder is a beak flute with a narrow flue and a sharp slit. The recorder has eight fingerholes including a hole for the left thumb. Cross fingerings can be used and they are required to play in the overblowing range. The instrument only has a small range to slide the tones. Fingerholes for the two lowest tones are constructed as double-holes since the Renaissance to play the instrument fully cromatic. Some keys were introduced in this aera as well to handle large instruments. The recorders mostly produce a gentle and restrained sound that's sometimes a little bit dull or smoky too. However solo instruments often sounds more powerfully. The scale range is about two to three octaves whereby the recorders are overblown up to three times. The recorders overblow at first time into the octave, at second time into the twelfth and at third time into the fifteenth. The lowest tones can be overblown into higher ranges on large instruments. This enables to use these instruments as a kind of natural tone flute. Using special blowing techniques enables to play some intentional dirty tones. 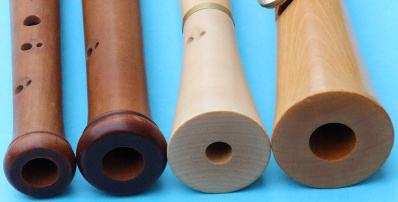 All sizes are used to date. Normally the smaller sizes from garklein to tenor are used as solo instruments. The soprano, alto, tenor and bass recorders form the typical recorder quartet. It sounds an octave higher than written. It's like a 4′-rank of a keyboard instrument in this point. Therefore it's also called 4′-choir. The recorder quartet with the tenor, bass, great bass and contrabss recorders sounds an octave lower and it's called 8′-choir. A recorder quartet is possible with the garklein, sopranino, soprano and alto recorders. This recorder quartet sounds two octaves higher than written, but this 2′-choir is very uncommon. If a 4′-choir is used sometimes the sopranino or garklein recorder doubles the soprano recorder part an octave above the soprano recorder and the contrabass recorder or a double-reed instrument (bass cornamusa, bass crumhorn, bass curtall, bass sordun, bass rackett, …) the bass recorder part an octave below the bass recorder in larger ensembles. 4′-choir and 8′-choir are also played together. This doubles all parts in octave intervals.

Nowadays the term "recorder" is used as a negative term for cheap soprano recorders of inferior quality those are produced in mass production since the second half of the 20. century. These "instruments" normally sound so horrible that you can effectively spoil every humans fun on handmade music.